It’s every coaster enthusiast’s dream to own memorabilia from their favorite parks and this Spring, Knott’s Berry Farm will be giving fans far and wide just that chance! In an effort to make room in the park for its continued growth, Knott’s will be auctioning off more than 300 one-of-a-kind items that tells the story of the park’s history in a public sale.

Though an exact list of the entire collection of items won’t be available until a week before the special auction, we do know a bit about some of the items that will be up for grabs. 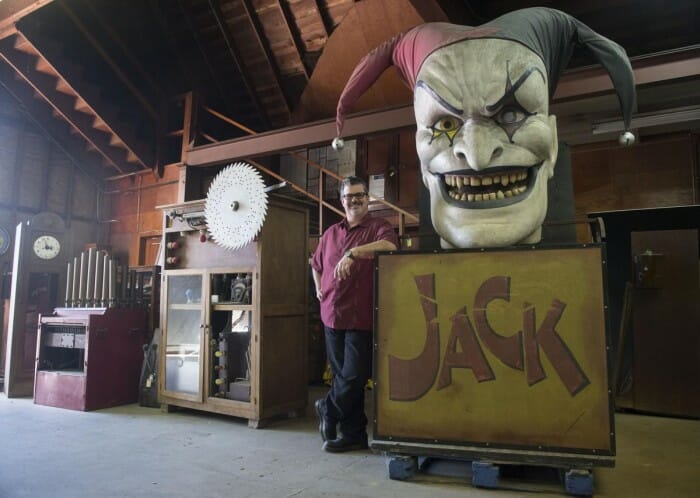 Jeff Shadic, manager of Park Decor & Visual Display, stands among some of the items being auctioned off. (Photo by Kevin Sullivan, Orange County Register/SCNG)

The park has said that some of the items included will be from Ghost Town, Camp Snoopy, the famous Mrs. Knott’s Chicken Dinner Restaurant, theme park rides, items from Knott’s Scary Farm, and the Walter Knott Archives as well as historic signs, antiques, a wide array of photographs and a variety of theme park vehicles such as this antique fire-engine.

More than a dozen of old coin-operated player pianos will be included in the auction along with a number of the rolls of heavy paper that provided the music. 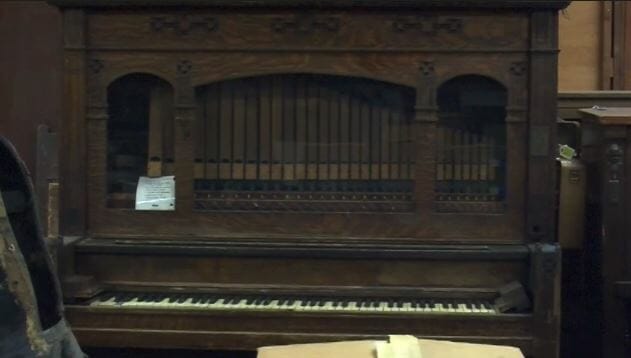 Even Walter Knotts’ partially refurbished 1920 Model-T Ford is up for grabs! 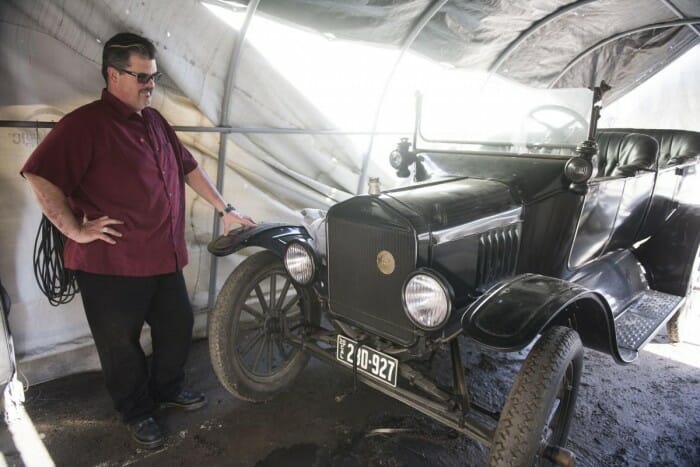 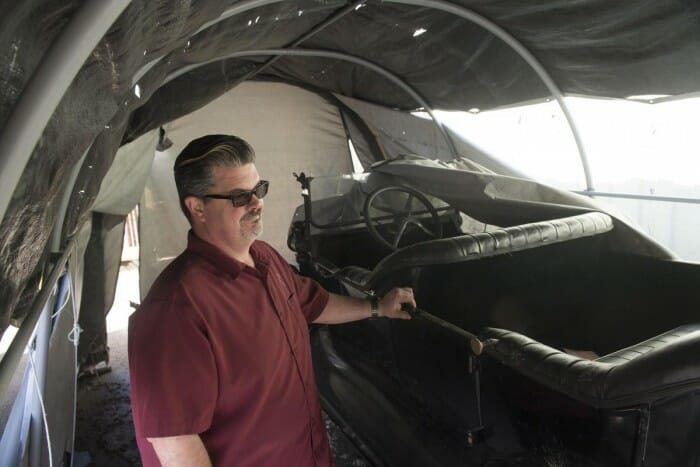 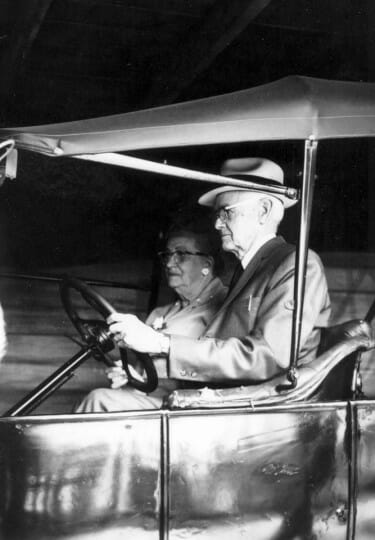 Other items include a three-foot gauge steam engine that needs refurbishment, Snoopy’s Parade Roadster, Peanuts memorabilia, paintings, and even old ride pieces from rides no longer at Knott’s, including a marquee sign from the old “Haunted Shack”, animatronic bears from “Knott’s Beary Tales” and figures from the Timber Mountain Log Ride and the Calico Mine Train Ride before they were refurbished a few years ago. 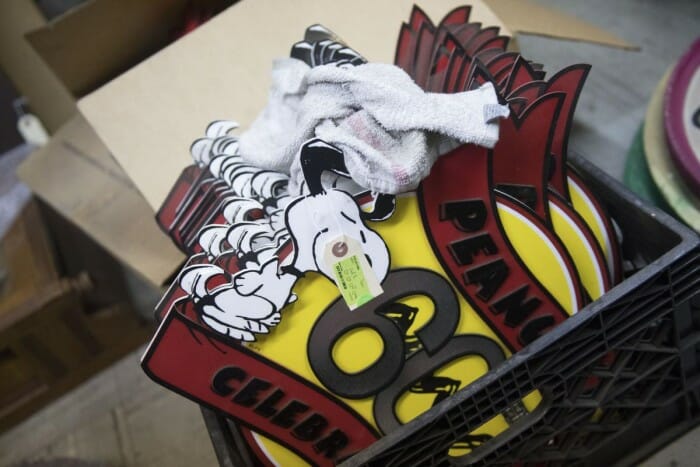 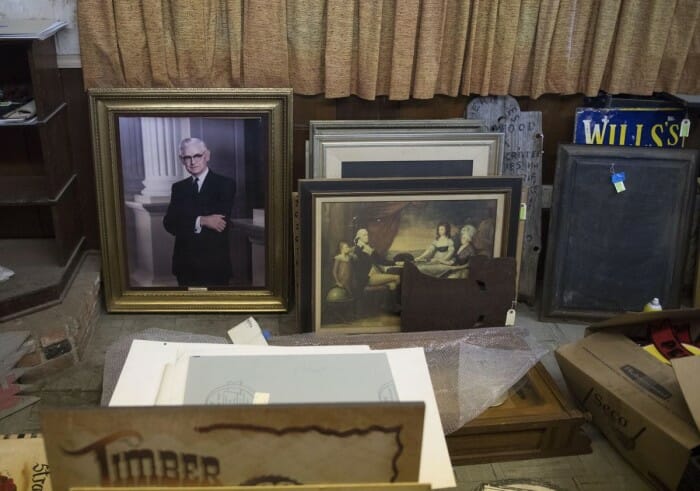 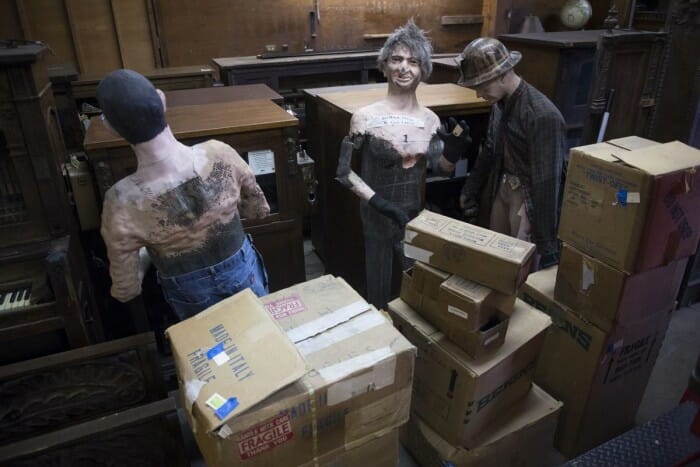 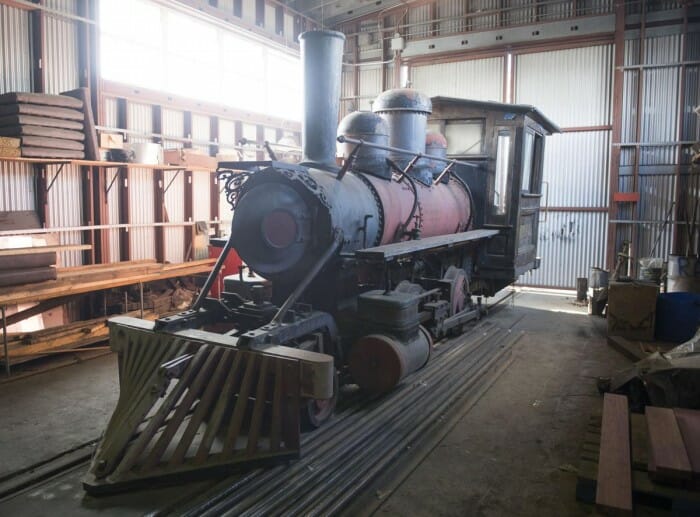 Many of the vintage signs would look awesome around someones in-home bar! A really cool giant park map signboard can be seen behind the statue in this photo below. 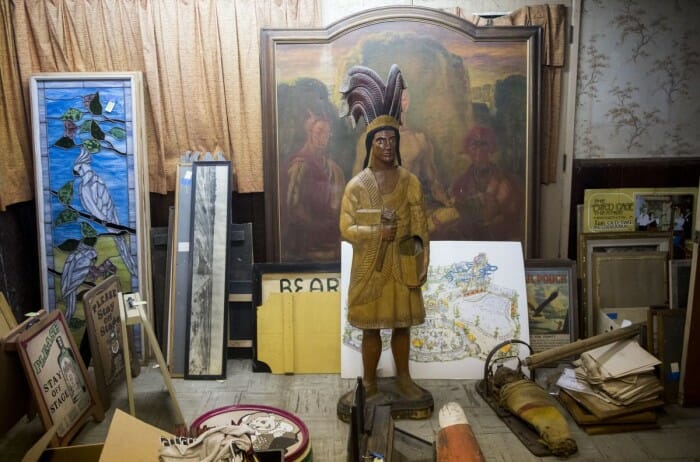 Numerous items will be available from the parks Knott’s Scary Farm Halloween event. Some of our favorites are the these two hearses, giant dragon, and a large gargoyle. 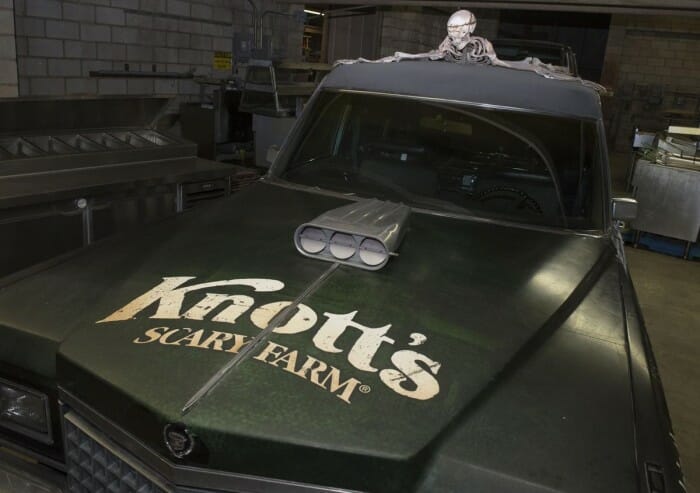 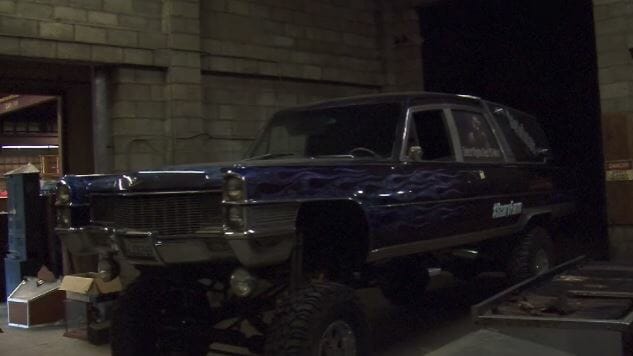 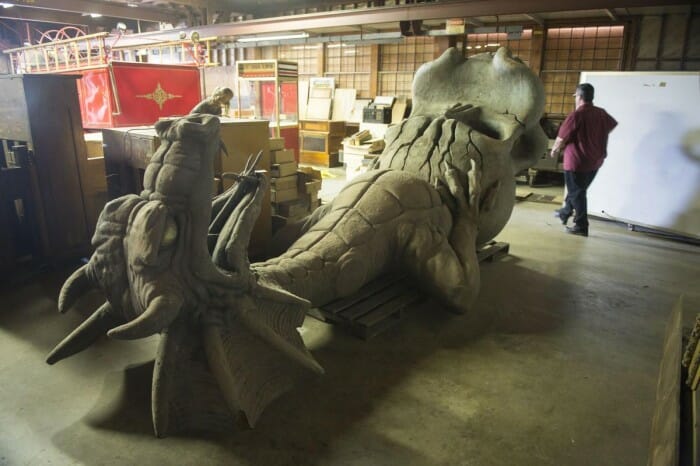 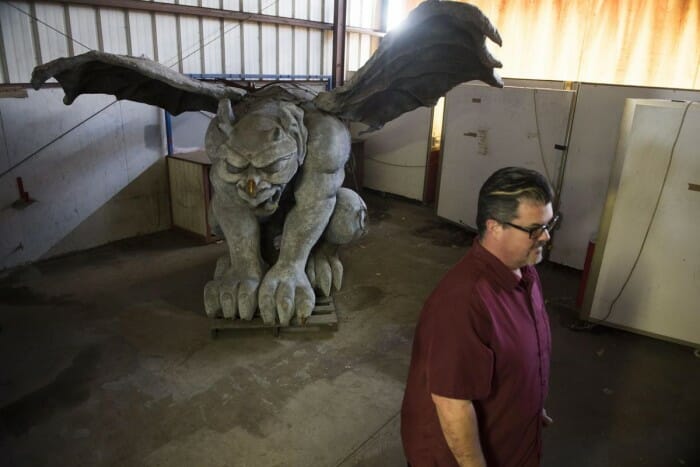 Many of these pieces of Knott’s history have been kept hidden in warehouses and other buildings around the park – like the second floor attics of some of the buildings in Ghost Town. It may be a little hard for the park to part with some cherished pieces of history, but they can be reassured knowing that the pieces will now be safely in the hands of enthusiasts who will cherish the pieces just as much as Knott’s did.

One rare piece we saw up for bid was a bit of a shock and surprised us that it’s on the auction block. A rare, old Conestoga Wagon that was used haul Borax from Death Valley. Walter Knott found, repaired, and brought to the farm in the early-1940s and has been sitting at Knott’s ever since. 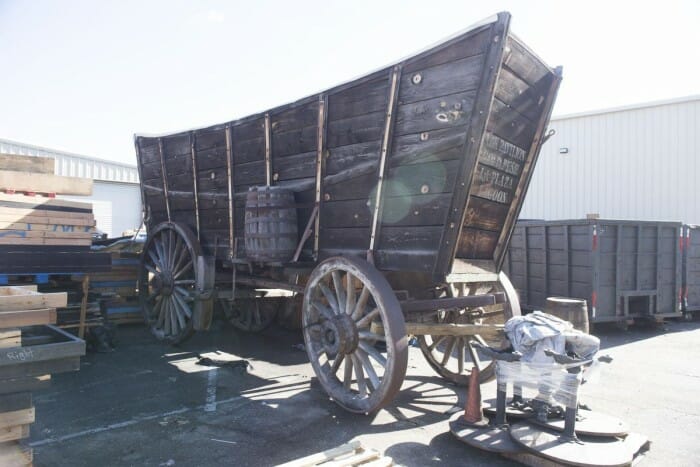 Some lucky park enthusiast could end up having this amazing Knott’s hot rod sitting in their very own driveway! 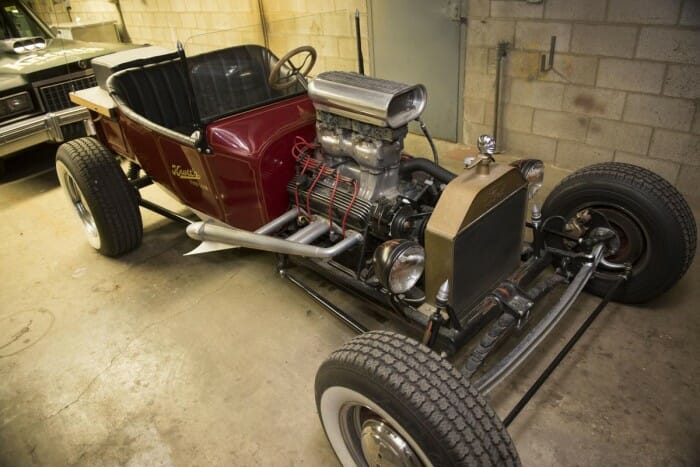 The auction was originally scheduled for the week of January 23rd, but has been pushed back. Heritage Auctions expects to have a list all the items available in late February. A public in-person preview of the auction items will be held a prior to the auction as well. The auction itself will be held March 31, with the preview the week prior in the Charles M. Schulz theater at Knott’s Berry Farm. It will feature approximately 300 lots with some of them having multiple items per lot.

Take a look around the warehouse in the video below. Jeff Shadic, manager of Park Decor and Visual Display at Knott’s and OC Register’s Mark Eades show off some of the items going up for bid.

We will be attending the auction and maybe even post a live stream during the event depending on the wifi/cell service inside the theater.

If you can’t attend, but are interested in bidding, you will be able to make bids online at HA.com before the actual auction begins. Items won in the auction will be shipped approximately two weeks after the auction ends and payment has been made. You can register to bid free of charge any time before the auction starts by clicking here. 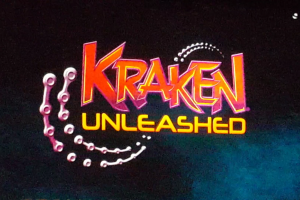 This morning at a media event titled "What's Next is[...] 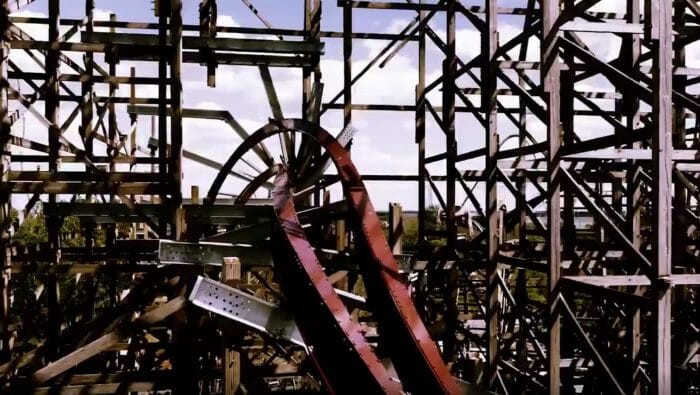 As most of you already know, Cedar Point's Mean Streak[...] 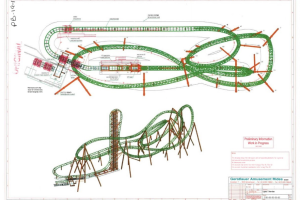