The Countdown is on for Kings Island Opening Day!

FINALLY!! The Opening Day for Kings Island is almost upon us with the 2015 season beginning Saturday, April 18th. It’ll be great to see old friends like The Beast, Viking Fury and Vortex after the hiatus and mastering the massive task of surviving Winter. If you’ve been keeping up with Kings Island’s social media channels, you know they’ve been keeping a timer with how far away opening day is. Despite no new roller coaster this year, there’s a lot of exciting changes coming for K.I. including adding new attractions to Planet Snoopy, expanding Starbucks to be one of the largest in the Midwest, and hitting International Street with The Sweet Spot homemade candy shop among the key upgrades. We gave you the scoop on the changes coming to the park back in November. While those things are great, we know what keeps you coming back for more each season: the roller coaster thrills that you can’t get enough of! Some of us are pretty jealous of Carowinds opening this week in Charlotte, North Carolina with the giga-coaster Fury 325 about to buzz around. To help cure the thrill sickness, let’s countdown the 4 Saturdays until Kings Island opens for the season by looking back at the last four coasters opened at the Largest Amusement & Waterpark in the Midwest:

Of course, we must start out with the smash-hit of 2014 with Banshee, which haunted park guests & feeding on nothing but scares & screams! We know of the success that the coaster had out of the gate [or should we say out of the grave] with serving over 2 million rides in it’s debut season, which broke a 27 year ride record, as we told you recently. This was a much needed boost for Kings Island as they have a longer time period between adding roller coasters than their big sister park, Cedar Point. The name of the ride can also be deemed a daring one since “Banshee” was the original name of what was the Mantis and what is going to be Rougarou. Cedar Point ditched the name after negative receptions in 1996 but Kings Island dug up the name for it’s current Thrill Machine and it’s working out nicely for them. With theme park goers and coaster enthusiasts rediscovering Kings Island after it’s Paramount Parks era ended, here’s hoping they keep striking while the iron, or steel, is hot. They can always count on Bolliger & Mabillard [B&M] to churn out new excitement and this will hopefully be the start of more coasters coming to the Island more frequently. With FastLane Passes being a popular option and the Banshee moving 1,650 riders per hour, this will be many guest’s first ride stop after they get in the park.

We’ve arrived to Diamondback, the 2009 addition to Kings Island which was a massive comeback for the park of rock star proportions. The marketing alone that led up to the opening of the slithering, scaling coaster was a significant effort in itself with the short form videos posted on K.I.’s website and the dressed up clues around the park while the coaster was under construction, with warning signs and caution notifications. The $22 million ride has certainly lived up to the hype that was surrounding it before it’s opening. Granting rides to such celebrities as Serena Williams and becoming a must ride attraction for coaster freaks  has April 18th circled on many coaster crazies’ calendars. Giving about 1,620 rides per hour, Diamondback is a coldhearted snake that will get you wanting to be bit over & over again! Before the 2009 grand entrance on the Island, the previous original concept coaster opened in 2005 [more on that below]; this one was certainly special in all ways and has not stopped receiving rave reviews. The splashdown, the lift hill and the snake designed coaster train. Yes, Yes; Rivertown at the park is where it’s at.

Vekoma International is who you can thank for the really cool concept that is Firehawk. It first invaded The Island back in 2007 after it was dismantled and removed from the Cedar Fair-acquired Six Flags Worlds of Adventure theme park at Geauga Lake. Billed as the first and only flying coaster in the Midwest when it originally opened as X-Flight in 2001 with Six Flags, the coaster does have an incredible appeal with the bird-flight position. Transplanting rides from another park to Kings Island is nothing new as this was done when the park first opened in the early 1970’s. Firehawk is truly a treat to ride as thrill seekers go up the lift hill to 115 feet, travel at speeds of up to 50 miles per hour and covers 3,340 feet of track…..all while on your back!! With the Flying Dutchman style coaster keeping excitement in the Coney Mall section of the park, it does join an impressive list of first coasters at Kings Island from King Cobra to Vortex [and yes, let’s not blame them for the Son of Beast experience that lasted for 9 years]. In 2012, The Los Angeles Times ranked Firehawk at #4 on the Top 10 List of Coasters at Kings Island; the Californians know what’s up. [Side Note: I had an idea for a coaster like this as a kid and I was gonna name it “The Sleepless”. I would of gotten away with it too if it hadn’t of been for those meddling coaster manufacturers!!]

We wrap up our mini-coaster tour with a mini-coaster!! Backlot Stunt Track originally opened as Italian Job: Stunt Track in 2005; this ride was themed after the 2003 Paramount film Italian Job which starred Charlize Theron and Mark Wahlberg. This is also notable as being the last Paramount themed ride to be added to the park before the Cedar Fair acquisition in 2006; the ride held it’s movie themed features for a short time before being given it’s current name. You can thank this little ditty for taking out those Antique Cars that The Brady Bunch rode on during their famous visit to the park back in the 1970’s. Nonetheless, this one certainly is a family-friendly ride as you only need to be 48 inches tall to stunt out on the Stunt Coaster, which goes up to 40 MPH.  This coaster is still appreciated by guests 10 years after it opened, despite some of the special effects being removed over the years. Like the Kings Island & Miami Valley Railroad changing it’s scenery over the years, the attraction still proves to be good fun for families wanting to ride together.

The clock is still tick-tocking away til Kings Island’s Opening Day. The new Starbucks and Sweet Spot shops appear to be so alluring that it’ll hypnotize you to stay there all day long! Ok, well maybe just an hour or two until you get full. Ride It Like You Mean It, Ya’ll. 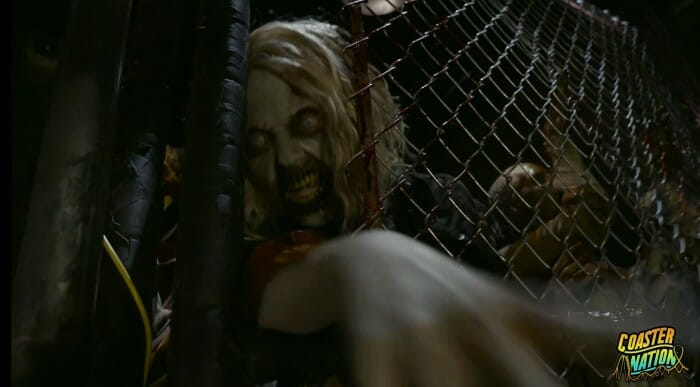 The Walking Dead Attraction at Universal Hollywood: Behind the Scenes

Call it luck of the Irish or just plain talent[...]

Here’s a look back at The Beast’s original tra

UNTAMED is One of Our Favorite Roller Coasters in

Take Your Taste Buds on a Culinary Journey around