Over the course of the last few weeks, we have highlighted several proposed coasters that were never built in our “Lost Concepts” series. This week’s featured coaster was proposed, but replaced by a ride from another manufacturer.

In the early 1990’s Kings Dominion was booming. In 1991, the park built Anaconda, an Arrow multi-inversion coaster. As Paramount took control of the park, plans were quickly developed to build new rides themed to their intellectual properties. Proposed additions on their 5 year master plan included a new Nickelodeon section, Outer Limits: Flight of Fear coaster, and Top Gun: The Jet Coaster.

Kings Dominion seemed to have inked a deal with B&M on Top Gun as CAD models were actually completed, which are usually signs that rides are close to the manufacturing stage. But, the park ultimately changed plans and decided to move forward with a totally different attraction. They agreed on Intamin’s Volcano: The Blast Coaster — a LIM launched inverted coaster that would utilize the former structure of  The Lost World / Smurf Mountain. Over the course of the next several years, all of the proposed attractions were eventually built except for B&M’s Top Gun design. As you can see from the layout in the images below, Top Gun: The Jet Coaster would have been a revolutionary inverted coaster placed directly behind Racer 75. 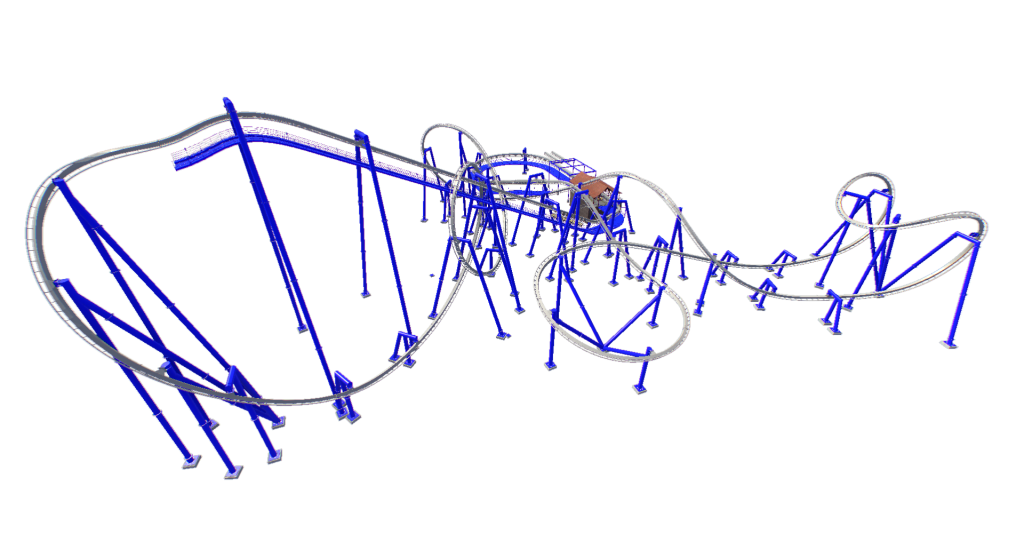 The proposed Top Gun coaster featured a lift with a spiral drop, a vertical loop that wrapped around the lift hill, dive loop, curved zero-g-roll, cobra roll, and a 3G helix finale. The ride was slightly over 3000 feet long with a drop exceeding 130 feet and a top speed over 60 mph.

It is unknown why Paramount switched their plan from B&M to Intamin. It could have been due to the park seeking a replacement for the original Lost World attractions — however, it is likely that the change was done as a result of B&M being contracted at nearby Busch Gardens Williamsburg for the manufacturing and installation of Alpengeist.

It is rather interesting to note that the basis of this layout was slightly tweaked and extended to create the Top Gun invert seen at Carowinds. Furthermore, it would be over 20 years before Banshee became the first inverted coaster with a loop wrapped around it’s lift hill.

Check out our recreation of this long lost proposed coaster!

Would you have preferred the B&M inverted coaster to be constructed? We want to hear your thoughts, let us know on our socials!

Busch Gardens is seeking a few good ghouls, zombies and[...]

Pandora–The World of Avatar is a themed area currently being[...]

For months, coaster enthusiasts have been waiting their first sight[...]